The State of the 'Caliphate' Is... Meh

Apparently, no matter how awesome the power of social media, you can't just announce that you're the boss of everyone and expect people to fall in line.

The transformation of ISIS into the Islamic State, aka IS aka "The Caliphate," over the weekend is off a pretty soft start. Deprived of a huge chunk of its army of spambots by some good policing on the part of Twitter, IS has been reduced to grass-roots organizing to get its nutty message out. Here's how that is going so far: 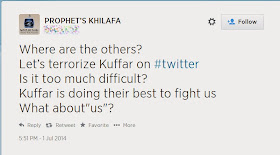 And so it goes. IS twitter users are increasingly baffled and frustrated that everyone isn't more excited for them. They honestly can't seem to understand why the al Qaeda jihadists they've been fighting for months and the much larger population of Muslims who despise them aren't all falling in line. Even worse, most of them are criticizing the unilateral declaration of global hegemony by IS.

The announcement has largely failed to move the needle in terms of winning new support from other global jihadist groups, especially the major al Qaeda-aligned organizations, which was surely the primary purpose in declaring a caliphate in the first place.

IS has trotted out a series of oaths of loyalty from people and organizations that were already sworn to it when it was just ISIS -- ranging from their reliable contingent of Indonesian fanboys, to a handful of supporters in the ranks of the Pakistani Taliban, to the "Central Division of Al Qaeda in the Islamic Maghreb" which apparently still calls itself al Qaeda despite defecting to ISIS months ago.

Meanwhile IS's online fans look increasingly stupid as they flock to any sign of good news, only to be disappointed. When their Pakistani Taliban supporters pledged, a hashtag spread like wildfire claiming the whole organization was swearing loyalty to IS. A series of sheepish corrections followed, and the official announcement by IS was forced to clarify that it wasn't the whole group.

ISIS fanboys nagged Ansar al Sharia Tunisia online with questions about whether it had sworn loyalty to IS, and received a terse "that news is not true" in response. AST contains a large, possibly majority, contingent of IS supporters, and was one of the strongest candidates for a previously unaligned group to jump on board, so any sign of hesitation there has to be discouraging, although it could still happen.

Speculation has run rampant that al Qaeda in the Arabian Peninsula was planning to pledge, but everyone is still waiting for Godot on that front, and they could be waiting a long time. As with the others, there are strong contingents of individual support for IS within the group, but it's not at all clear that these fans can shift the direction of an organization led by hardcore AQ loyalists. While anything is possible, it's my guess that IS can at best peel off a splinter from AQAP as long as its leader, Nasir al-Wuhayshi, remains alive.

Given that ISIS has generally been smart about its media strategy, it's entirely possible it still has an ace up its sleeve -- in terms of a planned high-profile defection -- but if so, it had better be truly big and it had better happen soon. Otherwise, it's starting to look like that time ISIS threw a caliphate party and nobody came.

If declaring a "caliphate" doesn't move the needle, IS is facing a long hard slog for the near-term future. It is fighting a war on multiple fronts, and its battlefield successes could have sparked a surge in support. The declaration may have taken the wind out of their sails, while at the same time requiring them to hold territory at any cost. If Zawahiri can hold the affiliates in line, IS may be reduced to rooting for American drone strikes to take out key leaders in al Qaeda's affiliates, in the hopes that their replacements will be a bit friendlier to their caliphate gamble.

Buy J.M. Berger's book, Jihad Joe: Americans Who Go to War in the Name of Islam